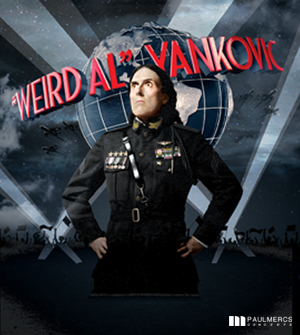 Slated to visit over 100 cities throughout North America, Europe, and Australia, the tour follows the release of Weird Al’s #1 album, Mandatory Fun (RCA Records). The album was released on July 15, 2014 and immediately shot to #1 on Billboard’s Top 200 Album Chart. This is the first time in over 50 years that a comedy album has topped the charts, and the first time ever that a comedy album debuted in the top position. Mandatory Fun has also been nominated for a Grammy in the category of Best Comedy Album.

“Weird Al” Yankovic is the biggest-selling comedy recording artist in history. Now in his fourth career decade, he has won three Grammys (with 15 nominations) and countless accolades for classics like “Eat It,” “Like a Surgeon,” “Yoda,” “Smells Like Nirvana,” “Amish Paradise” and “White & Nerdy.” For the rollout of his 14th studio album, Mandatory Fun, Weird Al world-premiered eight videos in eight days, taking the Internet by storm. The videos, including parodies of Pharrell Williams’ “Happy” (“Tacky”), Robin Thicke’s “Blurred Lines” (“Word Crimes”), Lorde’s “Royals” (“Foil”), and Iggy Azalea’s “Fancy” (“Handy”), garnered over 46 million views in the first week. Yankovic also set the U.S. record for having the most tracks from one album on Spotify’s viral top 10 at one time, taking the first 4 spots. In addition, “Word Crimes” debuted in the Billboard Top 40, making Al one of only three people to have had Top 40 singles in each of the last four decades (the other two are Michael Jackson and Madonna). The Mandatory World Tour begins on May 12 with a 5-night run at Planet Hollywood