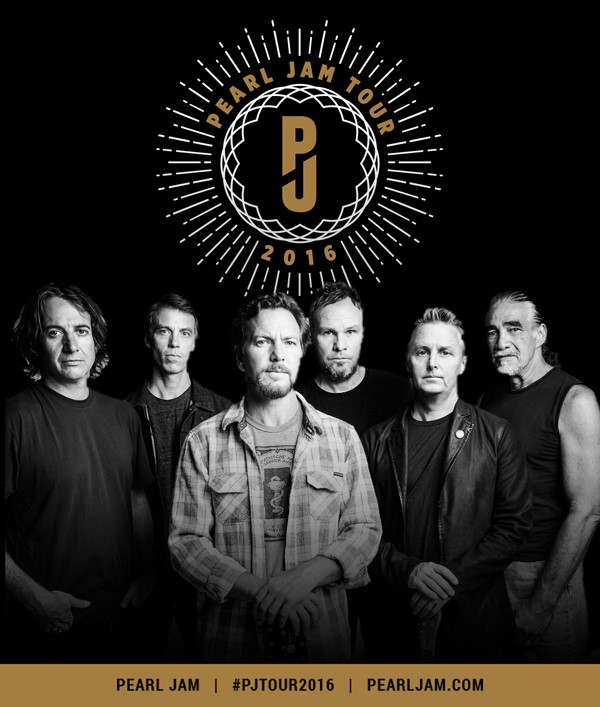 CANADIAN CITIES TO INCLUDE

January 19, 2016 – Vancouver – Paul Mercs Concerts is pleased to announce that Pearl Jam will perform a series of North American concert dates between April and August of 2016 and will be hosting the Canadian leg of the tour, highlighted in red.

Pearl Jam’s 2016 North American dates kick off in Fort Lauderdale on April 8th, include festival headlining slots at New Orleans Jazz & Heritage Festival and Bonnaroo and wrap in August with two nights each at historic baseball stadiums Fenway Park in Boston and Wrigley Field in Chicago (full list of tour dates below).

Ticket information regarding Pearl Jam’s shows at Fenway Park and Wrigley Field will be announced over the coming weeks.

UPDATE January 29, 2016 – Vancouver – Paul Mercs Concerts is pleased to announce that Pearl Jam will perform a
second show in Toronto on May 11, as part of their North American concert tour.

Tickets for the Quebec date available at www.lecentrevideotron.ca, 1-855-790-1245 or in person at the Box Office.

Tickets for the Ottawa date available at www.CapitalTickets.ca, 599-FANS or 877-788-FANS in person at the Box Office

Tickets for the Toronto date available at www.ticketmaster.ca , 1-855-985-5000 or in person at Ticketmaster outlets (no first day sales at box office).

*Exact Pearl Jam performance dates at New Orleans Jazz & Heritage Festival and Bonnaroo to be announced by festivals over the coming months.

Pearl Jam released their Grammy Award-winning tenth studio album, Lightning Bolt, through Monkeywrench Records/Republic Records on October 15, 2013. Lightning Bolt debuted at #1 on the Billboard Top 200 chart as well as #1 on iTunes in over 50 countries and is available now at www.pearljam.com, via iTunes and all major retailers.

Please note that all 2016 Pearl Jam non-festival tour dates are “An Evening with Pearl Jam” — there is no opening act.