THE SOUL OF MANTRA – LIVE! 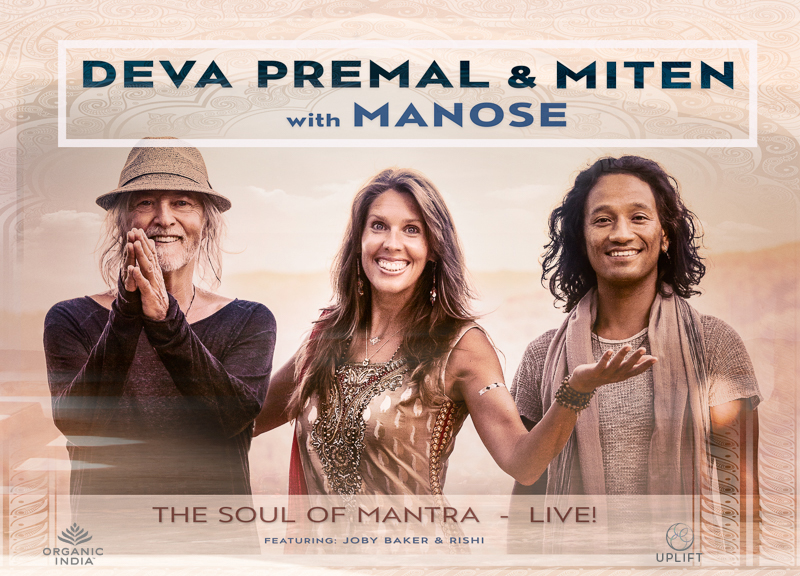 In case you had any doubts about Miten and I honoring our Soul Of Mantra – Live 2018 concert schedule, worry no MORE!! We’ve welcomed the incredible gift/challenge of Miten’s heart surgery to lift us up and to fully embrace life in THE HERE AND NOW.

Miten will join us on stage at some point, but along with Manose and myself, and our great band (Joby Baker, Danish Rishi and Spencer Cozens) who are ready, willing and able to step up and elevate our voices and our sacred mantras into the stratosphere! I can’t wait!

We are blessed with the gift of life, and we come together in celebration of our truth, our lives and loves…plus some great music!

Vancouver, BC, November 28, 2017 – Paul Mercs Concerts is pleased to present the following tour date of celebrated chant masters Deva Premal & Miten with Manose, who will be accompanied by Joby Baker & Rishi.

Vancouver, BC, November 20, 2017 – Paul Mercs Concerts is pleased to present the following 4 tour dates of celebrated chant masters Deva Premal & Miten with Manose who will be accompanied by Joby Baker & Rishi.

Deva Premal & Miten have traveled the world for 20 years, sharing the healing power of mantras. The unique blend of Deva’s voice, the ancient Sanskrit chants, Miten’s soulful songs and Manose’s sacred flute offers audiences an evening of peace and transformation.

Miten: “Mantras are such a powerful force. We’ve seen so many people — us included — become spiritually rejuvenated as a result of chanting them. Personally, the dusty cobwebs and darker corners of my life have been washed clean by the mantras.” Deva Premal & Miten’s concerts are known for their transformational and healing effect. Their voices, their music and not least the communal chanting inspire a meeting of body, mind and spirit.”

Deva: “For me, the greatest gift of chanting is that it brings a deep relaxation into my busy mind. In Sanskrit, ‘man’ means mind and ‘tra’ means to be free from, so ‘mantra’ is literally a way to free the mind. This has been the essence of my journey with meditation.”

Nepalese bansuri maestro, Manose – acknowledged as among the world’s best – accompanies as always Deva Premal & Miten both on flute, vocals and various instruments, including ukulele.

The SOUL OF MANTRA – LIVE tour is augmented by Canadian Joby Baker on bass, vocals and keyboards and Danish percussionist, Rishi. Together, this unique ensemble serves as a musical bridge to experiencing the Soul of Mantra. Deva: “This planet is definitely shaking and trembling right now. It is an amazing moment to be alive because it is becoming very clear that we cannot expect peace to be delivered from outside – we have to find it within. For me, the mantras are a gateway to inner peace and to a deeper acceptance – and my joy is to share them.”

With a large, faithful and constantly expanding audience – from New York to Moscow, from Paris and London to Buenos Aires and L.A, Deva Premal & Miten show us, year after year, that in the spirit of music and mantra, humanity is able to unite.

Deva Premal & Miten with Manose’s 2018 Soul of Mantra – Live tour is sponsored by ORGANIC INDIA in association with UPLIFT.

Vancouver tickets available at chancentre.com/tickets, 604-822-2697 or the ticket office.

Calgary tickets available at tickets.mru.ca, 403.440.7770 or the Taylor Centre for the Performing Arts Box Office